As natural gas is transported across the country in pipelines, it is periodically pressurized at compressor stations located at intervals of 40 to 100 miles. A major concern when dealing with natural gas transmission is the formation of condensate inside the lines. The compressors can only compress gas and the ingestion of liquids can result in severe damage to the compressor. When gas leaves the compressor it is at its highest velocity and in mostly a pure gas state. Over the course of the journey to the next compressor station some of the gas condenses into liquid form. It is crucial this liquid not make it to the next compressor or damage will occur. 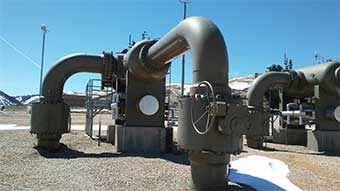 Just upstream of each compressor station is a small tank commonly referred to as a condensate or knock out pot. These pots are located beneath the pipeline and are intended to catch the liquid condensate. As the gas arrives at the compressor, it has slowed to its lowest velocity and any water or hydrocarbon liquids that may have condensed drop into the condensate knockout pot.

Once condensate starts to collect in these tanks it must be periodically drained off or it will eventually spill back into the pipeline and damage the compressor. Years ago, it was necessary for a worker to check each knockout pot daily and manually drain as needed. Today, the automated solution is to use a Babbitt LS7000 Level Switch. The LS7000 reliably measures the low conductivity natural gas condensate and typically actuates a solenoid that in turn opens a valve and drains the tank. 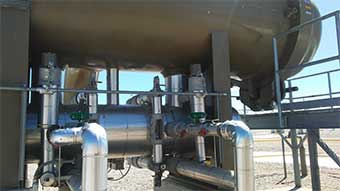 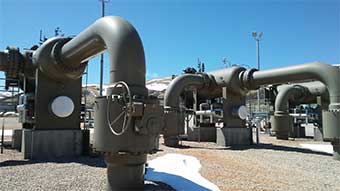 By automating this procedure, personnel are able to visit a site less frequently resulting in significant cost reduction. Babbitt Level Switches are solid state and have no moving parts to jam, stick or break - making them an excellent replacement for float switches or other mechanical devices. Babbitt International has hundreds of these sensors monitoring condensate pots all across the country.

The LS6000 level switches pictured were manufactured to be used on Continuous Treatment System that treats H2S. The switches are installed in a container that collects condensate and are used to control the level via a valve at the bottom. One switch is used as a high level alarm, which when activated sends a signal to a PLC to open the valve via a timer. The second level switch serves as a backup high high level alarm switch in the event the primary should fail. 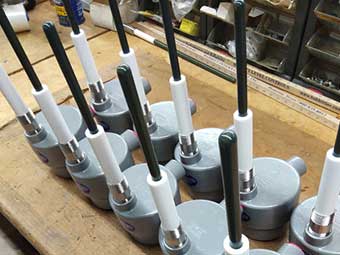 Originally, float devices had been used on the CTS skids, however Sulphur build up caused the floats to stick and not actuate when the level rose. Although an overfill condition did not occur, an alternative more reliable solution was needed. Vibrating tuning forks were originally considered as a replacement, but were later ruled out due to concerns with buildup and cost.
A pair of LS6000 Level Switches with HALAR coated probes were chosen for a test application. The units performed well during the trial phase and were subsequently selected to replace the float switches at existing sites and on new skid packages. 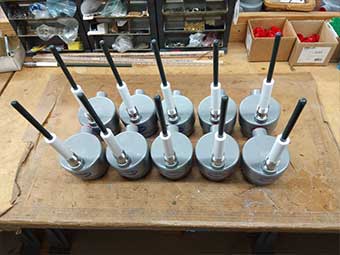 Babbitt Level Switches have the ability to ignore a significant amount of material buildup, thus eliminating the need for re-calibration. In the event the buildup causes a false alarm, no need to remove and clean the unit, the material buildup can simply be tuned out. Also, unlike float switches or mechanical devices, Babbitt Level Switches have no moving parts to wear out, stick or jam. 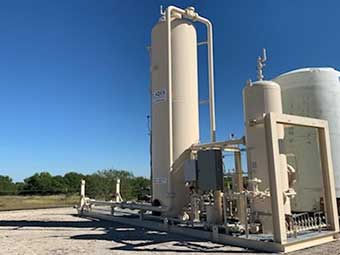 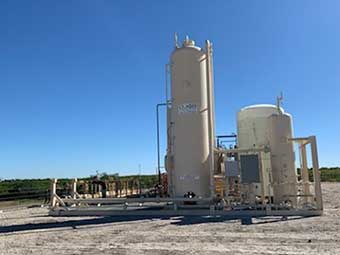