Oil/Water Interface Detection in a Pipe

A leading oil and gas company had been utilizing Coriolis meters for many years to sense the change of water to oil flowing through pipes. While the coriolis meters worked well, they were expensive, had grown old and needed to be replaced. Due to projected growth throughout Texas and Oklahoma, the company was planning to build a large number of new facilities and was in search of a reliable, more cost-effective solution.

LS6000 Level Switches with 4” HALAR probes and Teflon insulators were chosen for the initial test application. The LS6000 was installed in the pipe as seen in the picture. After the oil and water were separated, the oil was sent downstream while any water was directed back through this pipe. Under normal conditions, only water was supposed to flow into the pipe so the LS6000 was calibrated to ignore the oil and sense the water. The unit was wired (NO) so that the relay was de-energized in the presence of water. In the event that oil somehow escaped downstream and entered this pipe, the LS6000 would sense the absence of water, energizing the relay and sending a signal to shut down the pump/close a valve. The test application was a success and hundreds were ordered and installed at various locations. 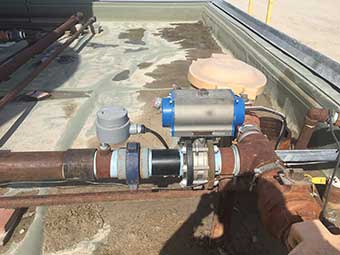 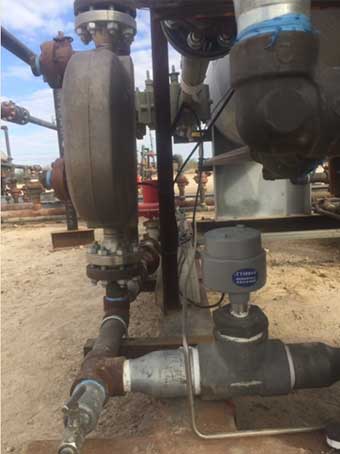 As a result, the company was able to reduce their cost of instrumentation by over 75% while maintaining both production and efficiency as the LS6000 helped to ensure that oil (money) didn’t escape through the water line.

The above example is of an oil/water interface application. The Babbitt Level Switch can easily detect the difference because the dielectric constants of the two liquids that are very different – water (70) and oil (2). The same would hold true for a variety of other interfaces where the dielectric constants are at least 20 apart. Ex. Water/Heptane. 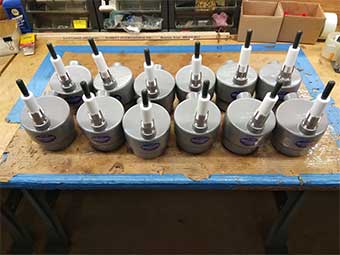 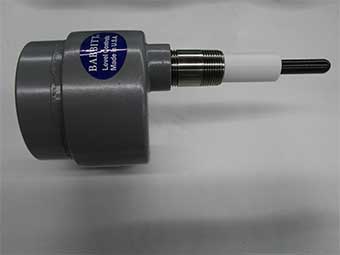 Oil/Water Interface Detection in a Separator

Separation tanks and vessels are commonly used in a variety of industrial applications where mixtures of oil products and water are produced. Once oil and gas are pumped from the ground, the mixtures are directed into a tank to be separated. Water settles to the bottom while the lighter oil rises to the top, where it is drained off through a valve located above the water level. The water is drained or dumped via a valve below the water level. A level instrument is used to maintain these levels in a continuous ongoing process. 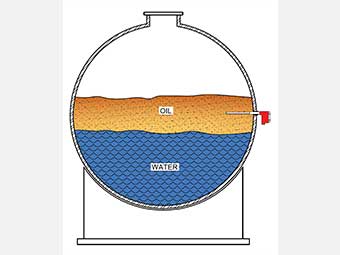 The LS8000 Remote Mounted Level Switch pictured to the right is being used as oil/water interface detection by an oil company in southern California. The unit is side mounted into a horizontal oil/water separator tank. The LS8000 is calibrated to ignore the oil and sense the presence of water. When water is detected, a signal is sent to open a valve and dump the water. As with many oil/water interface applications, there is often a third layer commonly referred to as the rag or emulsion layer. In some cases, this emulsion layer can fool level instruments into thinking the layer is water, causing oil to drain out the bottom. 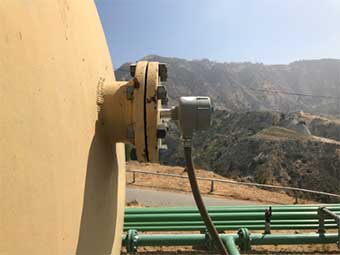 A HALAR coated probe allows the customer to distinguish this layer as oil, which when sensed, sends a signal to close the valve. Due to the extruded flange mounting, a longer insulator was used to prevent the possibility of buildup occurring between the tank wall and the probe.

This video demonstration below illustrates how our level switch can be used for oil/water interface detection applications. The level switch is calibrated so that it ignores the oil, but still detects water. As water is pumped into the tank, the level begins to rise. As the interface level comes into contact with the probe, the level switch activates, sending a signal to turn the pump off. As the water clears the probe and begins to drain, a time delay kicks on, allowing the tank to empty for 22 secs. Once the time delay times out, the pump kicks back on filling the tank with water. The level switch depicted in the video is our LS8000 Remote Mounted Level Switch, however the LS7000 would work as well.